Buy Today: The Only Industry Guaranteed to Go up in the Next 5 Years

Buy Today: The Only Industry Guaranteed to Go up in the Next 5 Years

“It ain’t what you don’t know that gets you in trouble. It’s what you know for sure that ain’t so.” — Mark Twain

Money managers were polled in April 2019 on what they thought the biggest danger to the market would be in the next 12 months.

Want to guess what they said? I’ll give you a hint, it sure the heck wasn’t a pandemic.

Even the guys who you would think are supposed to know what’s going to happen … don’t have a clue.

So I’m not going to waste your time by guessing.

Because I have an approach that doesn’t involve guesswork. And it works in both bull and bear markets.

When I boil it down for you, I’m sure you’ll agree on how simple and profitable it really is.

In today’s video, I’m going to share with you my approach and a way to make money with it.

Click on the link below and let me show you how the real money is made.

Hey, this is Charles Mizrahi with the Alpha Investor Report. If you’re new to my channel, click below to subscribe. This way, you won’t miss any videos on how to make money in the market, and more importantly, how to become a better investor.

The question that investors have been asking, literally for the past three months, is: “Is the bull market for real, or is it just a fake-out? Is this market so disconnected from the economy and it’s basically going to lead the economy higher, or is the economy going to drive down the market?”

Before I share my thoughts with you, let me just tell you this. Click here and subscribe to my channel. I’ll tell you why. When you subscribe to my channel, you’re going to get notified when I post my latest video. This is going to be usually one full day before the general public gets notice about it, so if you want to be first and Johnny-on-the-spot, I highly suggest you click subscribe. This way, you won’t miss any of the videos I put out, and you’ll get them a day early.

OK, so is the bull market for real? From the lows of March till now, the Nasdaq is positive on the year. The S&P 500 Index is flat, recovered from all the losses during the COVID-19 bear market and trading at about the levels that it was in February. So, is it for real or not?

Before I answer that, I want you to take a look at what others were predicting about what was going to happen this time last year. I want you to look at the Barron’s Big Money Poll of April 26, 2019. Check this out.

Barron’s sends a survey to money managers. It’s called the Big Money Poll. It conducts a Big Money Poll twice a year, in the spring and the fall. It emailed it to investors in late March of last year, 2019, and it drew about 148 money managers across the country with their responses. 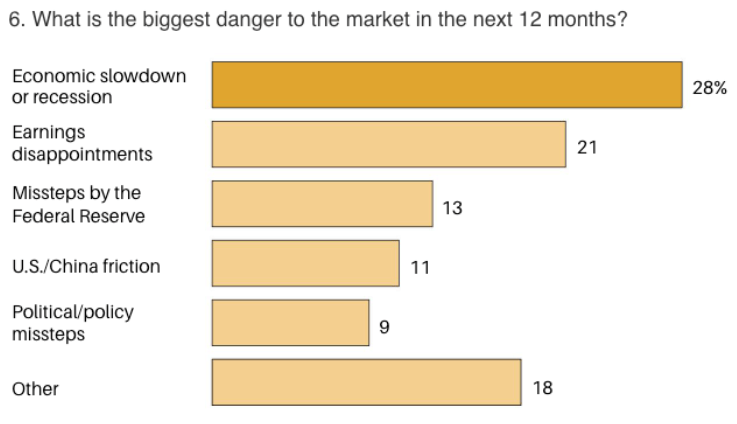 Note: the No. 1 concern. When Barron’s asked money managers what their concern was for the next 12 months, which is just a few months ago, it was an economic slowdown. No one — no one! — predicted that the biggest danger to the market was a pandemic, and that’s exactly my point, folks.

The future is very hard, if not impossible, to predict. Mark Twain said: “It ain’t what you don’t know that gets you into trouble, it’s what you know for sure that just isn’t so.” They were pretty sure a year ago that the economy would run into trouble — and that was the No. 1 danger — and they totally missed the mark.

Big money managers who should know more missed the mark on the biggest danger to the market, and that’s something that no one saw, no one predicted, no one was expecting.

So, to answer your question: “Is this bull market for real?” I really don’t want to waste your time trying to figure out if the bull market is real or where economy is headed, and I want to tell you why. That’s too hard to do. You’re going to be wrong more than you’re going to be right.

Instead, I play a much easier game. I focus and try to spot big trends. These are trends that last for years at a time. Then I go and buy companies that are going to make money by riding the trend. It’s pretty simple. That leaves me free to research things that are knowable and not waste my time with things that are unknowable.

One new tsunami trend that I’m looking at now that is just huge and continuing to grow is health care. This has been a huge wave that has gone on for the past 20 years and will continue on in the years to come.

Take a look at this chart. Health care has doubled as a share of total government expenditures in the last three decades, from around 12% in 1990 to more than double, 24%, in 2018. Currently, we spend close to $3.6 trillion a year on health care, and it’s only going to increase.

The reason is that we’re getting older — the aging demographic in America. Currently, there are 46 million people in the United States who are 65 years or older. By 2030, another 10 years, that number is projected to rise by more than 54% to 71 million Americans. In other words, one in five Americans is going to be over the age of 65. And by 2060, boy oh boy, that number is going to grow to 98 million, more than double the number it is today.

Now, that’s a huge trend. If there’s a way to follow it, it could make a lot of money — and there is.

You see, older people are at a higher risk of health problems, chronic illnesses, disability and so on and so forth. We all know that as we age, we need more medical care. That’s only going to continue because the population is getting older, and they are the heaviest users of health care. That’s why I recommend the Vanguard Healthcare Index Fund ETF (NYSE: VHT).

I like Vanguard for a few reasons. No. 1, it has extremely low fees. No. 2, you can capture the bulk of the health care market without worrying about what stock to pick. Over the next three to five years, riding this great trend should outperform the stock market easily.

By the way, in my next recommendation — which is only available to subscribers of the Alpha Investor Report — I’m going to recommend a stock that is excellently positioned to capture this trend.

This company is in the health care industry. It has a huge market share of 25% of its industry. It gets more than 50% of its revenue from two states: Florida and Texas. These are two states with rising demographics of an older population. A lot of snowbirds are moving down there to retire simply because those states don’t have any state income tax. This company is run by a rock star CEO, and this stock is selling at a bargain price.

Click the link to subscribe to my newsletter, Alpha Investor Report. You’re going to love what I put in there. Each month, I come out with one recommendation to ride a great industry wave that’s run by a rock star CEO and that’s trading at a bargain price.

My next recommendation is this company. It’s set to capture the aging demographic in two states where the seniors are headed — and over the next three to five years should do absolutely fantastic.